A group of mothers from diverse backgrounds were on hand to welcome the Minister for Faith and Communities, Baroness Warsi to east London this week.

The visit marked the award of the 400th Near Neighbours grant. The scheme is administered by four centres across the country – the Contextual Theology Centre co-ordinates the programme in London.

The visit took place at Departure arts cafe in Limehouse, where represetatives from five Near Neighbours projects were able to meet eachother, talk about their work and meet the visiting guests. They ate wonderful food together and even sang together.

One of the very first Near Neighbours supported projects – Baby Song – sees mothers and young children join together to sing and learn about eachother. This group, led by Captain Kerry Coke from Stepney Salvation Army, helped Baroness Warsi and other present to learn a new song – and even play the spoons! 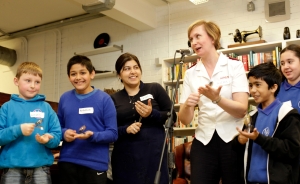 The 400th project to receive the grant is a group of mothers of Bengali, Chinese, Turkish, Somali, Japanese, Russian, Kurdish, Italian and Lithuanian backgrounds. They all have children at the same school in Stepney but did not previously engage directly with each other. With encouragement, the mothers applied for a Near Neighbours grant to take excursions to key London landmarks and used the opportunity to learn about each other’s backgrounds and develop friendships.

Near Neighbours is a three-year initiative that aims to bring people together from diverse backgrounds, helping them to build relationships and collaborate to improve the community they live in. The Near Neighbours charity was created by Church Urban Fund following the award of £5m by the Department for Communities and Local Government in February 2011.

The latest grant builds on the recent work of a group of fathers with equally diverse backgrounds living in Stepney, who used the funding to take a camping trip together with their children, developing a tight friendship group of parents who now work to support each other and their respective children.

Baroness Warsi said: “Near Neighbours grants are benefiting so many people from different backgrounds, faiths and cultures helping to build stronger and more supportive communities. It was fantastic to hear first-hand how these small grants are making such a big difference to the lives of local people and I’m sure they will have a lasting effect on everyone involved.”

Revd Canon Paul Hackwood, Trustee of Near Neighbours said: “Mums and Dads are the backbone of strong communities and it is great to see people really getting to know each other for the first time and forming strong family friendships in the local community through this work. Projects like this help us to build a stronger, more compassionate society from the ground up.”

Alison Jones, the coordinator for the project said: “At the first coffee morning there were 17 mothers from 11 countries- we had to find an atlas to learn where Uzbekistan and Eritrea were. The Portuguese mum and the Iranian mum discovered that they both spoke Italian and so helped each other out with translating into English. After the first meeting one Somali mum said ‘now I know some Bengali parents so I will say hello to them in the playground.’ ”

The East London advertiser reported on the event here.

Health, Fitness and Fun – with Near Neighbours

Young people are lazy, overweight and spend all their time sitting in front of a screen, right?

Well, not in Manor Park. Thanks to a Near Neighbours-supported initiative called Basic Sports and Fitness, more than 30 young people have taken part in a programme of activities inspired by the 2012 Games.

The scheme was set up by John Bosco Waigo, a Ugandan former boxer who now lives in east London. Having competed at the 1988 Olympics himself, John was perfectly placed to inspire a new generation of young people to get involved in non-contact boxing, running and general fitness training.

John’s aim was to bring together young people from diverse backgrounds in the local area and give them the chance to get to know eachother while learning more about health and fitness – and of course having fun.

As well as the physical training, the young people took part in a healthy eating workshop and also attended a local celebration of the City Safe scheme – a community response to violence.

John says this helped them to build self-esteem and discipline, “Parents have written to show their appreciations for the changes they have witnessed in their children – physical and behavioural changes.”

This isn’t the end of the project though. Three young people have now progressed onto a local boxing club to continue their training, while John is keen to help more local teenagers keep fit and healthy.

If you are involved in a project bringing together people of different faiths and backgrounds in eastern London and want to know if Near neighbours could support you, contact Revd Tim Clapton: nearneighbours@theology-centre.org / 0207 780 1600.

Young people from across eastern London came together in October and November to take part in an exciting and dynamic leadership training course with Near Neighbours. The 13 young adults, from a variety of ethnic and cultural backgrounds were nominated by their respective faith communities and Nehemiah Foundation community workers

The training took place at the International Headquarters of the Salvation Army and the Royal Foundation of St Katharine. The topics discussed included communication and inter-faith relations. The training was provided by the St Phillip’s Centre as part of its Catalyst Bronze programme.

Revd Tim Clapton, Near Neighbours Co-ordinator for eastern London said, “It was deeply satisfying watching the Catalyst trainees grow in confidence as the four days progressed. Exposed to some first class teaching and group work facilitation, their feedback showed the extent of their learning. One participant said he has started to use some of his new found skills in his leadership role in the Mosque which had been noticed.”

The trainees were joined by Government Minister Baroness Hanham from the Department for Communities and Local Government, as well as leaders of different faiths. One of them, Revd David Lambert from Stoke Newington said, “What a fantastic opportunity for those young people to gain a tremendous amount of knowledge and participation and to be so appreciative of what they were experiencing. I was really put to the test by the questions that were being asked and they genuinely were interested in what I thought and believe; they were inquisitive, not only of my faith, but by other faith leaders who attended.”

Near Neighbours is launched!

Eric Pickles MP at the launch of Near Neighbours

Eric Pickles, the Secretary of State for Communities and Local Government, today formally launched the Near Neighbours programme at a special event at St John’s Church, Bethnal Green. The event was attended by national faith representatives including the Bishop of London, the Rt Rev. Richard Chartres, as well as the Bishops of Southwark and Chelmsford.

Near Neighbours is a three-year initiative that aims to bring people together in diverse communities, helping them to build relationships and collaborate to improve the local community they live in. Near Neighbours was created by Church Urban Fund and the Archbishop’s Council following the award of £5m by the Department for Communities and Local Government to the Church of England in February.

Near Neighbours is focused on four areas of the country including Eastern London (specifically in the boroughs of Greenwich, Hackney, Islington, Lewisham, Newham, Redbridge, Southwark, Tower Hamlets and Waltham Forest) where there are many deprived multi-faith neighbourhoods. The programme is co-ordinated by the Contextual Theology Centre working in partnership with the Christian Muslim Forum, the Council of Christians and Jews and the Hindu Christian Forum.

In addition to developing work already underway at the centres, the Near Neighbours Fund awards small grants of up to £5,000 to projects that enable people of different faiths (or none) to work together to the benefit of the community. The national fund has received 35 grant applications since it opened in September (11 in Eastern London), and has approved over £98,000 of funding for 26 different projects in the four areas (£28,000 so far in Eastern London). Examples include a women’s group organising Zumba dance classes and other cross-cultural social activities in Bethnal Green and a community youth choir that unites young people in a highly diverse area of Southwark. (Here the choir sing and listen to their extraordinary story here: http://nearneighbours.wordpress.com/2011/11/02/the-david-idowu-choir/)

“The work we are celebrating today is the next chapter in the same centuries-old, proud and unbroken tradition of people of faith giving back to local communities. They enrich their neighbourhoods and improve the lives of those around them through practical action.

“Too often communities that live side by side don’t get together as often as they could to discuss and tackle the issues and challenges that matter to them most. This can lead to isolation and misunderstandings which are not healthy for local communities, when by and large, irrespective of background or faith most people want the same thing, for their neighbourhoods to be better places to live.

“Faith groups play a vital role in our neighbourhoods. We want to give them help to do what they do best. That’s why we are funding Near Neighbours as an investment in the future; supporting grass roots groups and projects to allow communities to get on transforming their neighbourhoods for the better.” 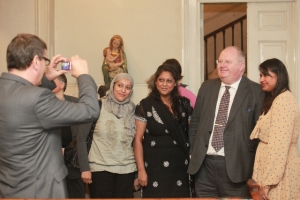 Baroness Eaton, chair of the Near Neighbours charity, said:

“Near Neighbours is able to make a real impact in local communities because it works directly with people who know and understand their specific issues. The applications that we have received so far are extremely encouraging and show us the depth of care that people of all faiths and backgrounds have for their communities.”

Ramesh Pattni, Faith Advisory Board member for Near Neighbours and Co-Chair of the Hindu Christian Forum echoes the praise:

‘‘Near Neighbours’ resonates with the Hindu ethos of ‘Universal Family’ of Man at many different levels. At the interpersonal level, one relates to the other, in this Universal Family, with friendship, trust and respect. Our faith can provide a significant context for these qualities to develop. These strands give strength and resilience to our personal, communal and social engagement. With this vision we have hope and confidence that the programme will result in positive outcomes of greater understanding and appropriate local change’.

If you want to listen to a recording of the whole event, simply click below: